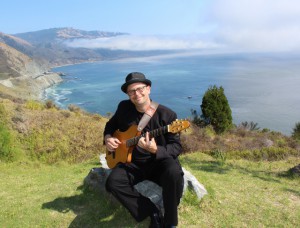 FROM MICHIGAN TO L.A.:  Steve Ezzo began his professional musical career at the age of 15 in the suburbs of Detroit, Michigan as the guitarist for a local wedding band.  At the age of 21 he moved to Los Angeles to perform as lead guitarist in a show band at Disneyland on the Tomorrowland Terrace.  While in L.A., Steve was also a session guitarist, performed with many top L.A. bands including the Kenny James Band (winner of Star Search), and operated his own recording studio.

WORLDWIDE TOURING:  Throughout the ’80s and early ’90s, Steve toured nationally and internationally as the guitarist for the Rock band, Three Dog Night (“Joy To The World” a/k/a “Jeremiah Was a Bullfrog”) and then for six years with the British heartthrob, Tom Jones (“What’s New Pussycat” / “It’s Not Unusual”).  During that time, Steve appeared on the The Tonight Show, The Arsenio Hall Show, and the Jerry Lewis Telethon and performed to packed stadiums around the world.  Steve also accompanied Burt Bacharach, Jerry Vale, The Drifters, and The Coasters and had the honor of performing for British royalty including Princess Diana, an American President, and various other notables.

CHICAGO:  In 1991, Steve retired from touring and became one of the top band leaders in Chicago where he specialized in society weddings, charity balls, and corporate events.  His orchestra performed at the private home of shopping center mogul, Melvin Simon, and at the Museum of Natural History for the wedding of Chicago TV anchor, Diane Burns and her CNN correspondent husband.

MONTEREY:  Steve relocated to Pebble Beach in 1999 and quickly established himself as the premier guitarist and band leader in the Monterey Bay area.  From 2000-2017, he and his band, The Monterey Bay All-Stars, specialized in weddings, corporate events, and private parties and was the #1 band on the Monterey Peninsula.  As of 2018, Steve made the decision to retire his band and now provides solo guitar as well as duos, trios and instrumental quartets for background music from Pismo Beach to Monterey during the months of November through May.  Steve has personally performed at the Monterey Jazz Festival, Monterey Blues Festival, Concours d’Elegance, AT&T Pro-Am Golf Tournament, U S Open Golf Tournament, and at countless private events all over the California Central Coast.

FUN FACTS: Steve is a skilled luthier and makes his own guitars from scratch.  His hobbies include ballroom dancing, competitive table tennis and golf.  He loves all types of sports as well as all kinds of animals and currently resides on the California Central Coast with his wife and four cats.  He supports Animal Friends Rescue Project, SPCA, The Otter Project, and Disabled American Veterans. Steve records all of his own demos in his recording studio and has been a full-time musician all his life.